How the Blog Works

How the blog works

The most recent entries or "posts" appear at the top. To find older ones, scroll down. On the right at the bottom of the page are links to older posts, which you can click on to find material posted last year, last month, etc.

Contributions are welcome and can be e-mailed to me at lyoulten@aol.com . Content can include 1) announcements about, or introductions to, forthcoming meetings and other events of possible interest to members. 2) Summaries of talks given at Literary Society meetings or at meetings of the Book Group. 3) Announcements of forthcoming TV or radio programmes of possible interest to readers. 4) Reviews of books read recently or in the past.

Ideally, contributions should be submitted as documents in Word format (.doc or .docx files) and pictures in the form of .jpg files but other formats, including .pdf files are acceptable.

Links can be included to give easy access to relevant material on the internet.

Why I wrote about Trieste: talk by Katri Scala 18 January 2020

Buoyed by the prospect of a New Year blessed with remarkable clarity, the 2020 vision, the Society assembled to hear Katri Skala discuss her much acclaimed first novel, A Perfect Mother, and explore the attraction of its setting, Trieste. The evening’s format had  the author being interviewed by her partner, John, who opened by pointing out that it had taken her a long time to get to Trieste. Like the embedded narrator of the novel, Jacob,  our speaker had been drawn to the city  for some years with both of them having part-Jewish ancestors with a pre-war association with Trieste and Vienna. The city boasts some distinguished literary associations; Stendhal was a rather jaundiced consul there for the Orleanist monarchy in the 1830s, Sir Richard Burton finished his stint as British Consul by translating the Arabian Nights  in his refuge on the Karst Plateau above the port and James Joyce arrived in 1907 on his odyssey into voluntary European exile and managed to finish Dubliners and write a large section of Ulysses before his departure in 1915.


Perhaps the writer who most influenced Katri was a pupil from Joyce’s English class at Trieste’s Berlitz School, Italo Svevo. This was the pen name of Aron Ettore Schmitz and possibly recalls his time in boarding school in Stegnitz in Swabia, a medieval German duchy straddling the border between the present day Länder of Bavaria and Baden-Württemberg. His father had sent him there to learn German, an asset for the aspirational middle class of the Austro-Hungarian Empire, and the literal translation of the pen name, Italian-Swabian, could be either conscious irony or an echo of a school nickname. This part-Jewish business man had published two novels which had passed largely unremarked by critics and public alike but Joyce advised having his third novel, Zeno’s Conscience, published in Paris where it was proclaimed a modernist masterpiece and proceeded to great commercial and reputational success. Perhaps inevitably, Svevo is canvassed as a model for Leopold Bloom in Ulysses. This was the first psycho-analytic novel and the Zeno recalls the ancient Greek philosopher famous for his use of paradox. The paradox in the novel being that the character in the story goes to a psychoanalyst but confounds any putative benefits from the exercise by lying to the doctor. Zeno’s problem was shared by Svevo – a lifelong inability to give up smoking.


The core dramatis personae in A Perfect Mother, which Katri emphasised was an ironic title, are Jacob the narrator and two other English nationals, Jane and Charlotte. The former is a forensic psycho-analyst with a previous professional relationship as well as a social one with Charlotte who is 10 years her junior. Jacob is a journalist in his mid-50s whose professional star is fading and who is going through a dispiriting divorce which threatens to reduce his future,  much cherished contact with his two sons. Drawn to the attractive upper-class Charlotte, Jacob seeks an affair with her, thereby eliciting ambiguous tender feelings from Jane towards her. The tension rises in this darkly psychological tale before bursting over the trauma at the onset of the women’s relationship. Our speaker likens the work, pervaded as it is by a sense of dislocation, to Tolstoy’s novella, The Kreutzer Sonata , with which it shares a sense of the confessional. In making Jacob the narrator, Katri said she viewed the action at a slant with this oblique detachment reducing the emotional intensity in comparison with the Tolstoy story. The seed of her interest in Trieste had been planted when she read Jan Morris’s description of it as a melancholy place of nowhere but she loved its multiple layers;  Roman amphitheatre Romanesque cathedral, medieval town centre and the baroque Maria Teresa borgo – the Hapsburg legacy. It must have been a wrench to move the action back to Gloucester in the later stages of the novel.


The talk concluded with the audience sated by the unravelling of this tale of love, loss and delayed emotional reaction running pari passu with an intriguing peeling of the onion that is Trieste. For those bitten by the Skala bug, the author next moves to a non-fiction saga from ancien régime France and the life of une dame entretenue or as Nigel Farage might say “a kept woman”.

Posted by LJFYblogs at 14:43 No comments:

An Evening with Jonty Driver 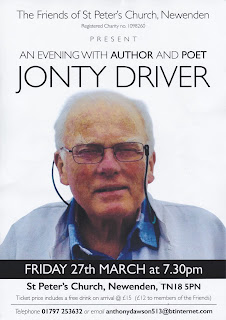 Posted by LJFYblogs at 14:27 No comments:

Clive James was a man of many parts, but I hadn’t thought of him as being especially brave till I saw the interview he gave to Mary Beard (BBC2 January 4th) towards the close of his life. This is partly because the persona he adopted was of the self-deprecatory kind that is easy for readers and viewers to feel comfortable with. He spoke often about how he’d achieved success simply by doing what he was good at, and he never quite believed how successful the journey had been. The kid from Kogarah, an unremarkable township in Sydney’s southern suburbs, was going to be revealed one day as some kind of fraud, he informed Michael Parkinson on his talk-show. But this was ingenuous; as soon as he picked up a pen or sat in front of a TV camera and turned a conspiratorial grin on the audience, we knew we had the real deal.
After Cambridge, and some publishing successes, he was hired to write the TV critic’s column for the Observer. Before he took it on, most of the offerings had been humourless. I was at the time in my young twenties and knew nothing much about TV criticism or Clive James, but the first time I read his column, I burst out laughing. So did much of the nation. He sent up everything from BBC documentaries to blockbuster American serials, and went on to do it again on television. But at the same time he was writing literary criticism, journalism and poetry of such quality and integrity that we started to understand he was remarkable, and worth sticking with for what we could learn from his considerable gifts.
The Beard interview took place in his study at home. Before he spoke a word to her, his appearance came as a shock. He’d had years of chemotherapy, and many spells in Addenbrooke’s Hospital in Cambridge receiving oxygen for his lungs. The results were revealed in a face splotched with the effects of radiation, medication and the sheer physical effort of coping with a terminal condition.  The interview was conducted in a spirit of cheerfulness and positivity neither of them were probably feeling. But it worked; Beard explored the writing, the poetry, the TV appearances. Two of the ‘Postcard’ series had been shown immediately before the programme; it was good to see that the trademark reflectiveness of style and paradoxical observations had not dated in any way. Those of us who had seen the series first time round, hugged the re-runs to ourselves as we might a friend who comes unexpectedly to the door. Younger viewers may have wondered why a sick old man in a baggy T-shirt and a straggly-haired old woman, merited a slot on primetime weekend TV. I hope they hung around and listened long enough to find out.
We who admired him could have told them why we did, and how much. How the poetry, rigorously crafted, said everything about what it is to be human, in such elegant metres. How the journalism was compulsive reading, coming from an incisive mind he took pains to deprecate. He was only, perhaps, for our generation, but he examined it as few others of his time have. When she closed the interview, I had the strongest feeling that Mary went back to her car and wept into her handkerchief. Clive James was that kind of man. If you need to re-acquaint yourself with even a soundbite of his best writing, look at the last page of ‘Unreliable Memoirs’ where he reflects on what it was for him to have grown up in Australia. It will grip you with such nostalgia, you may have to remind yourself that you haven’t even lived there, may not even have visited the place. That’s his secret; anything he did made you feel a part of him. I hope Clive James knew the respect in which oldies like me held him. As he might laconically have put it himself, I’m missing him already.
Posted by LJFYblogs at 12:57 No comments:

Meetings are held in the Lower Court Hall or in the case of the May and December meetings this year, in the New Hall. Friday evenings at 7:00 pm for 7:30 pm Subscription £20 pa (includes a glass of wine at each meeting). Visitors - £5 donation.

Wed 15 January: at Sue’s : The Salt Path by Raynor Winn, chosen by Sue

Mon 17 February: at Charlotte's: To The Lighthouse by Virginia Woolf Chosen by Charlotte